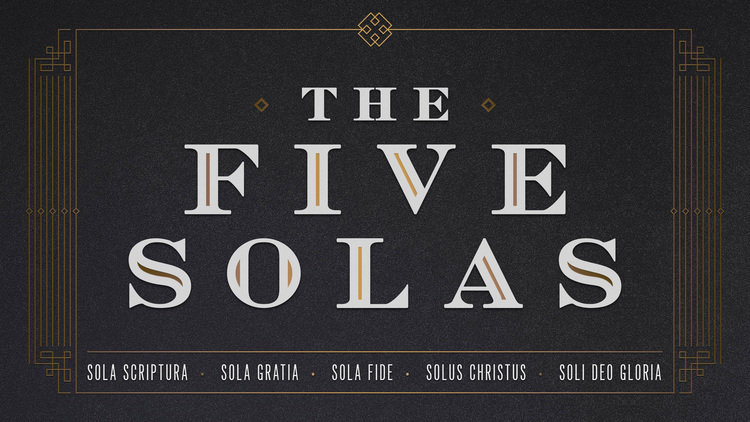 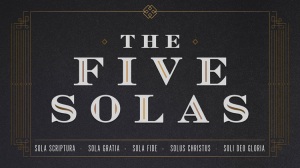 “The language of grace so permeates the Bible and all traditions of Christian theology, ” says Carl Trueman, “that to claim that salvation is by grace alone is, in itself, to claim very little at all” (Grace Alone, 17). Everybody loves grace. We name our churches, songs, and even children after the word. Yet, the content that the word carries can differ from person to person. It is certainly the case historically; for while the church had always used the terminology of “grace,” it did not always carry a Biblical understanding of the term. The Reformers did not so much discover the concept of grace as return it to its Biblical category.

The Reformers were not the inventors of grace. Long before Luther and Calvin there was Augustine. Sometimes called the “Doctor of Grace,” there is no one outside the Bible who has been more influential in discussions and debates on the subject than the great church father. And, since Augustine was so influential in the era of the Reformation, we must understand his teachings on grace to understand the Reformation rightly. Augustine had told the story of grace through his own personal narrative. As a man plagued by existential uncertainty and sexual immorality he had sought for a way to attain some form of transcendence, but nothing provided any rest to his restless soul. Instead, transcendence was found in the grace described by the apostle Paul. Particularly, Romans 7 sounded to Augustine like his own cry and Paul’s resolution, then, must become his. For Augustine the grace of God was an internal provision which transformed the sinner, making possible what would not otherwise have been so.

Pelagius, a contemporary theologian, took serious issue with Augustine’s formulation of grace. While the whole of Augustine’s Confessions articulated this view of sin and grace, it was a particular line from the work that triggered Pelagius’ disgust. Car Trueman explains:

“Give what you command and command what you will.” This statement, taken by itself, is not unusual. It is one of many petitions that the work contains, as the whole Confessions is an extended prayer, but it captures the essence of Augustine’s theology of grace. God is sovereign, and he commands what he wishes of his creatures. However, as fallen humans trapped in sin, this implies that God must also provide them with the ability to do these things. (66).

The Pelagian Controversy, as it has historically been called, drew sharp and distinguishing lines in the theological sand. How one understands the grace of God has been influenced by one or the other side of this historical debate.

At the heart of the debate was how one understood what it meant to be a Christian. The birth of Christianity came under the constant threat of persecution, and so a common theme among the early church was that true believers suffered for being faithful. In one sense it was easier to identify who was truly a Christian. Hardship tended to weed out the false converts. After Christianity had become the accepted religion of the Roman Empire, however, it became more clouded and difficult. Monasticism arose as a particular way to demonstrate spiritual vitality and commitment. The Christian life was one of asceticism. Pelagius saw Augustine’s formulation of conversion as too liberal, as suggesting that moral failure was simply to be excused. Instead, he formulated a particular view of grace that was cooperative with man. Grace was the endowment of freedom in the human and the example of Christ which gave man the ability to obey and the model of obedience to emulate. Our problem, as Pelagius understood it, was moral ignorance not moral depravity. Grace, in other words, is entirely external because our sin is external.

Despite an initial rejection of Pelagianism – it was denounced as heresy by the Council of Carthage (418) and Ephesus (431) – over time the church shifted closer to its teachings than it perhaps realized. Gabriel Biel, for example, spoke of man’s acquisition of grace through a pactum – a pact between God and man, in which God bestowed a state of grace on the persons who “did their best.” It was in direct response to such notions that Luther articulated theses 16 of the his Heidelberg Disputation:

The person who believes that he can obtain grace by doing what is in him adds sin to sin so that he becomes doubly guilty.

If salvation was truly “by grace through faith and this is not of works lest any man should boast” (Eph. 2:8), then that needed to be clearly taught. It needed to be defended and articulated afresh, and it still does.

We persistently undermine the Biblical teaching of grace in our modern culture. We do so through one of two extremes. On the one hand we, like the church in Luther’s day, upload the term with all sorts of religious and moral duties that we believe earn God’s favor. We suggest that “God helps those who help themselves.” We view grace as God’s empowering us to do a little better, try a little harder. We view grace as God giving us just the boost we need to essentially still save ourselves, to do it without Him. On the other hand, we can rob grace of any real weight by suggesting that what it really means is God’s turning a blind eye to sin. Pastors and popular teachers throw the word around without any definition. So, grace means you don’t confront people’s sin, it means complete acceptance, and perfect tolerance of immorality. Grace becomes an empty term in both extremes.

Within the Bible, however, a line is drawn from God’s grace to Christ’s sacrifice. So, Paul can tell the Romans that they are “justified by his grace as a gift, through the redemption that is in Christ Jesus” (Rom. 3:24; see also Rom. 5). In 1 Corinthians 1:4 the “grace of God” is given “in Christ Jesus.” In Galatians 2:21 Paul states that to return to the law would mean to “nullify the grace of God,” “for if righteousness were through the law, then Christ died for no purpose.” In Ephesians 1:7 the “riches of His grace” is ours “in redemption through His blood.” Grace is Jesus’ payment for our sin, not our efforts to be better. Grace is God taking sin so seriously that it must be addressed in Jesus. If the Bible connects grace to the death of Christ then we need to emphasizes this content. Grace is meaningless apart from Christ. It is powerful when it is tied to His finished work on the Cross.

The Reformation recovered this truth and we do well to listen to the Reformers on this point. Grace is always in danger of being altered, misunderstood, and abused. When grace is tied to Christ, however, then the truth of salvation apart from works is preserved. Keep Jesus at the center of grace, like the Reformers did, and find the truly powerful and life-changing grace of God.