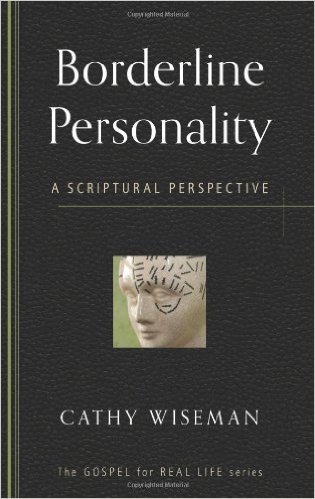 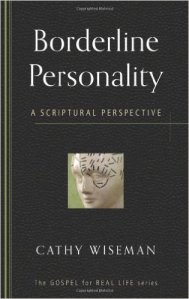 Cathy Wiseman served for many years as an assistant to a psychiatrist who specialized in BPD. She has seen many patients who suffer from this diagnosis and has counseled many herself. She had bought into all the psychological literature on the subject and yet despite its many explanations and proposals, there was often very little change in her patients. In her own words:

So I read all the research and tried every therapy the experts prescribed. I was available 24/7, and I prayed with all my heart for their healing while the psychiatrist prescribed cocktails of medication. But nothing we did could fill their agonizing emptiness. After several years, I reached the end of my rope, totally exhausted from working with those suffering with BPD. (5)

This point of exhaustion was the start of something new for Wiseman who turned to God and His Word and found hope both for her own counseling ministry and for those who suffered from Borderline Personality Disorder.

As part of the Gospel for Real Life Series, published by the Association of Biblical Counselors, this volume is a simple booklet and serves merely as an introduction to the Scriptural Perspective. It will not satisfy all readers, and shouldn’t serve as the end of the conversation on the subject. But it is a tremendous starting place. Wiseman is exceedingly knowledgeable about her subject. She can intelligently interact with the dominant definitions of BPD, and corresponding theories of causation. She can describe the symptoms of the disorder both in psychological terms and then turn to apply Scripture to those same symptoms. This ability to parse the disorder and demonstrate the Bible’s relevance to it is what makes this such an excellent work. She walks readers through nine different symptoms, describing them in both a psychological and Biblical manner, and helping readers to see the Scriptural teaching on the issues at hand. She provides a useful chart for navigating the parallels and differences in description and understanding.

Wiseman also demonstrates her skill in explaining proposed treatments. She is able to interact with new research, describe the approaches by various psychiatrists, and discuss the limitations of these approaches. She turns, then, to provide real practical helps to Biblical counselors. What can Biblical Counselors do? How can they be helpful? Where do they need to be cautious? She attempts to provide some basic and introductory answers to these questions in the conclusion of the book. In addition she provides some proposed homework ideas to help counselors effectively care for those who suffer from BPD.

Serving as both an introduction to the conceptual issues and as practical help for Biblical Counselors Borderline Personality Disorder: A Scriptural Perspective is an incredibly useful booklet. Again, it should not be viewed as an exhaustive treatment on the subject, nor should it be used as a step-by-step field guide. Rather, it should be used as intended. A helpful introduction to a Biblical approach to a complex issue. Cases of BPD should be handled with the utmost care and by seasoned counselors. Still, Cathy Wiseman shows us that there is more help found in God’s Word than the average counselor might have assumed. God’s Word can speak to even complex psychological disorders.