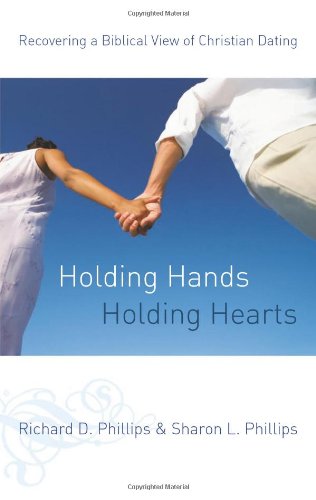 What does the Bible say about dating? According to Richard & Sharon Phillips, “Nothing…” and “Everything” (12). Holding Hands; Holding Hearts seeks to present Christian readers with a careful examination of the Biblical principles that inform godly dating relationships. Their ability to balance the “nothing” and “everything” dynamic of Scriptural teaching on dating allows these authors to compose a helpful guide for believers in the world of modern dating.

The Phillips have written this book because they clearly have a concern for young Christian singles in the church. In fact the book is drawn from the years of pastoring singles and from Richard’s position as pastor to single’s ministry. Richard Phillips is now the senior pastor of Second Presbyterian Church of Greenville, SC and is the co-editor of the Reformed Expository Commentary series. So, he brings to this subject years of personal pastoral experience with singles, his own marital insights, and a strong competency in Biblical studies. In other words, he knows Scripture, ministry, and marriage and brings all three to bear upon the work at hand.

The book is broken down into two parts. Part One focuses on the foundational theology and big-picture principles. The four chapters in this part unpack the “Biblical view of dating and relationships.” Through use of the larger storyline of Scripture the authors detail God’s original intent and design for relationships, the impact of the Fall on them, and the redemption of human relationships in the gospel. While part one focuses largely on the principles of marriage, the Phillips insist that these are guides to how we ought to conduct ourselves in romantic relationships. The principles cannot be applied univocally; yet they should still inform our relationships at some level. As they explain:

The approach of this book is to start with the biblical principles of a healthy marriage and to work backwards to describe a healthy biblical dating relationship. Now, a marriage proposal does not usually happen on a first date, nor would we advise that it should. But neither does a marriage really begin with a wedding. Whether we know it or not, the patterns we establish in dating continue into marriage. Therefore, the foundations for a healthy and godly marriage begin while we are dating. (13)

The emphasis on marital principles is good in that it does not lead the authors down the path of creating their own separate guidelines. Because the Scriptures don’t speak directly to the concept of dating, which is a modern phenomenon, it would be tempting to either simply follow the world’s guide to dating, or to create a whole new set of laws apart from God. By focusing on marital guidelines and seeking to apply them differently to dating relationships the authors stay tied to Scripture. The danger, however, is that dating and marriage are not the same and there are some principles which are not to be applied in dating relationships. The Phillips do a decent job of safeguarding the distinct nature of each relationship, and yet I am concerned that there is often an overactive emphasis on marriage among young Christians in dating. It can tend towards some extremes in relationships (not the least of which is in the submission/leadership component). I wish that an emphasis on godly principles regarding friendship might have been used to star the conversation, with a movement towards marital principles only as relationships progress. I think this is a safer framework. Still, the authors do a good job of not saying more than is in Scripture and attempting to safeguard the application of marital principles to dating relationships in unhealthy or univocal ways.

Part two shifts to the practical dynamics of dating, or as they term it: Biblical wisdom for dating and relationships. The five chapters that make up this section of the book highlight various elements of a dating relationship, including selecting a potential date, a guide to “first dates,” the nature and responsibility of commitment, moving towards marriage, and waiting for love. Here the authors get more involved in the details of the relationship but without losing any emphasis on Scriptural wisdom as the means by which we discern what is appropriate at the practical level. Readers will find some great suggestions and solid principles here too and on subjects that very few have written or spoken about so plainly.

The book strives to balance speaking to dating without departing from Scripture. This is not a small task because, as has been stated, the Bible does not directly address the modern concept of dating. By focusing on what the Bible says about marriage they are able to stay close to Scriptural truth. Yet they don’t attempt to force dating into a specific mold, suggesting that the Bible says more than it really does. Selecting a potential partner is not like Jacob finding a wife (if she waters his camels then she’s the one). They don’t make definitive statements about non-moral, non-Biblical concepts either. Some have suggested that courting is more “Biblically faithful” than dating, but the Phillips don’t give into such silly notions. They recognize the modern context in which we live and seek to apply Scripture carefully to it, as we all ought. In that regard they have done the church a service not simply by writing a book about dating, but by modeling the careful application of Scriptural principles to modern contexts.

Overall this is a good book and one worth reading. It offers guidance grounded in Scriptural truth. I am concerned that an overemphasis on marital principles will tend to imbalance the immature relationship. It can make young men and women insist that relationships must move towards marriage long before they are ready to do so, and it can tempt some to seek to implement marital elements into non-marital relationships. The danger in books is that you can never sufficiently predict how different readers need to apply its teaching. Some readers, no doubt, need to be rebuked for lack of commitment and for toying with the emotions of the opposite sex. Yet, some readers need to be warned not to think of their relationships as little marriages before such relationships are prepared to move in that direction. Holding Hands; Holding Hearts is a specific book designed for specific readers and to the end that it encourages responsible emotional care in relationships (holding hearts) it will be a good book for the Christian community.