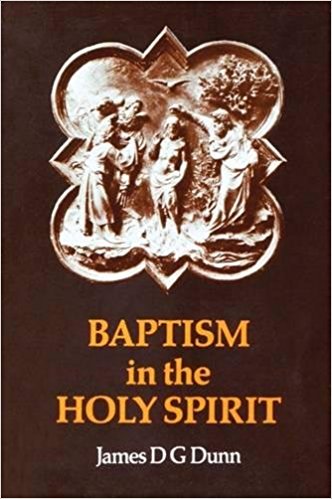 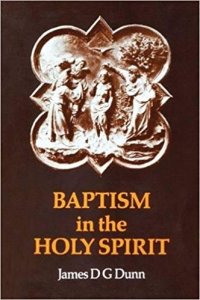 Anyone familiar with the debates over the doctrine of the Baptism in the Holy Spirit will know just how important this monograph is. James Dunn sparked an entire conversation with the publication of his doctoral research in 1970. Since its publication it this volume has become one of the most significant academic works on the issue and remains  a standard of some importance. The evidence of its importance is seen in its careful exegetical work. Baptism in the Holy Spirit is a valuable academic work because it forces readers to wrestle with the actual details of the relevant passages on this much debated doctrine.

The book is a careful exegetical study of the various events and passages that provide the case study for this doctrine. Across the Gospels, Acts, and Epistles Dunn meticulously interacts with the lexical and syntactical issues of the text to make his case. His case simply being that baptism in the Holy Spirit was a conversion-initiation experience, contra Pentecostalism. He writes:

I hope to show that for the writers of the NT the baptism in or gift of the Spirit was part of the event (or process) of becoming a Christian, together with the effective proclamation of the Gospel, belief in Jesus as Lord, and water-baptism in the name of the Lord Jesus; that it was the chief element in conversion-initiation so that only those who had thus received the Spirit could be called Christians; that the reception of the Spirit was a very definite and often dramatic experience, the decisive and climatic experience in conversion-initiation, to which the Christian was usually recalled when reminded of the beginning of his Christian faith and experience. (4)

For Dunn, conversion and Baptism in the Holy Spirit coincide. You cannot be a Christian without this baptism occurring, and it as part of the process of becoming a Christian.

Dunn’s case rests and two major arguments. On the one hand some events used by Pentecostals to defend the doctrine of subsequence, are actually epochal shifts and cannot be used to set a paradigm for all Christians. The baptism of Jesus and Pentecost, for example, launch a new stage in redemptive history and as a result are not fit as paradigms for the believer today. Furthermore, Dunn argues, these events though indeed pointing to some sort of second work, are actually more akin to an initiation than the doctrine of subsequence. So, Jesus’ baptism initiates the new age and Pentecost initiates the new stage of the church. The baptism in the Holy Spirit on these occasions does more to set a paradigm for initiation-conversion than a doctrine of subsequence.

On the other hand, many of the passages in Acts and the Epistles which are used to defend a doctrine of subsequence are not interpreted accurately by Pentecostals, he argues. Here, Dunn shines. His exegetical work is very thorough and detailed. He pays careful attention to the syntax and lexicography. He notes the usage of words, their common interpretations, and emphasis of the grammar. He makes his case that Pentecostals have simply not read the texts carefully enough – His work offers the more accurate reading of the texts.

Dunn is very gracious and appreciative of Pentecostals in this work. There is no doubt that he is critical of their views, and he writes very strongly against the doctrine of subsequence, but he is not cruel or unkind in his presentation. There is a vast difference, in other words, between the way MacArthur writes about Pentecostals and the way James Dunn does – both in academics and in tone.

There is great reason why this volume has been so significant in the history of the debate. It is well-written, thorough, and compelling. Dunn is an astounding scholar and his exegetical work here is very hard to argue with at points. He handles the text well and argues with great specificity. Readers of all stripes will have to acknowledge his acumen and skill.

Not all, of course, will agree with his conclusions. I myself was surprised at how seemingly flat he presented the various passages detailing the Baptism of the Spirit. It has been my conclusion that the various passages on baptism in the Holy Spirit present different facets of the ministry of the Spirit and that when read in context we find each does present a unique picture. A perspectival theology will find room to hold aspects of each of the dominant views on Baptism in the Spirit. Dunn, however, tends to flatten this diverse picture. He reads Luke, it appears, so much in light of Paul that Luke’s own distinct pneumatology is nearly swallowed up.

At other times it seems that Dunn’s reading of some of the Lukean accounts in Acts are overstated. For example, his conclusion regarding the Samaritan reception in Acts 8 states that Philip’s ministry had been ineffective, but the case for this seems weak to me and he overstates his conclusion. My reading of the Scriptural text itself simply does not conform as easily to Dunn’s conclusions.

The lay reader will find this a difficult and dense read. It is littered with untranslated Greek and the exegetical work that Dunn performs can be dense and cumbersome to wade through for the non-academic. It is an important work but not an easily accessible one for the average reader. Pastors, especially those of a more Charismatic and Pentecostal bent, will be well served in wrestling with what Dunn has done here, even if they remain in disagreement. Overall Baptism in the Holy Spirit is an important book that will sharpen even a Charismatic/Pentecostal theology by forcing readers to wrestle earnestly with the details of the text of Scripture.