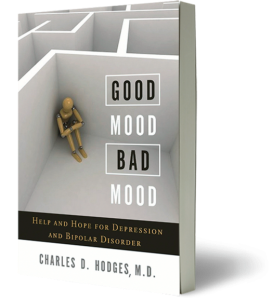 Depression and bipolar disorder are two of the most common diagnoses made in medicine today, says Dr. Charles Hodges. Hodges is a family physician who has witnessed in his career a dramatic increase in the number of diagnosis. As both a physician and a Biblical counselor he is concerned about this increase and the reasons behind it. In Good Mood Bad Mood he exposes readers to a host of relevant research and information that suggests that not only is there far too much over-diagnosis of these conditions, but there is a better way to understand, explain, and treat the issues of depression and bipolar disorder. This volume is a tremendous asset to counselors everywhere. Its value is most clearly seen in the fact that it takes seriously science, life, and Scripture.

The real reason for the surge in bipolar disorder diagnoses was not the fact that we had a new disease or that we were in the grip of an epidemic of an old one. Instead, the problem seemed rooted in the way we diagnose and treat depression today. (160)

His contention in much of the book is that the way clinicians have diagnosed depression has been highly subjective, and insufficiently precise. The way we have sought to treat it too has often been ineffective. He makes a compelling case throughout the book, sighting a myriad of case studies, medical journal articles, and other research to support his claims. He pays careful attention to the shifting discussion on diagnosing mental disorders and looks at the cultural context that has played a part in the over diagnoses of depression. The book takes seriously the claims of the medical community and interacts extensively with the work of other leading professionals.

Good Mood Bad Mood also deals seriously with the realities of life. Picking up on the work of Alan Horwitz and others, Hodges explores how the loss of sadness in our culture has dramatically impacted the way we understand depression. Hodges explores the biological, social, and spiritual values of sadness and helps readers to see how sadness is a normal, healthy part of life. The criteria used for diagnosing depression, however, leave no room for this sort of normal, prolonged, sadness. Hodges explains:

The DSM criteria do not distinguish between symptoms of sadness due to identifiable causes and sadness that has no cause the patient can describe. Nothing in the criteria can tell the physician or the psychiatrist if Susan was stricken with depression out of the clear blue sky (disordered sadness) or if she lost her job three weeks ago and just had her house repossessed (normal sadness). (66)

By taking life seriously, and taking the host of contributing contextual factors seriously Hodges helps us to see that the ways we think about depression may not be entirely accurate. We are whole being people and our biology is not the only contributing factor to consider. Hodges does a great job of reminding counselors to take science seriously, but to also remember that they people they care for are whole-being people. As such there may be a variety of contributing factors to consider and wrestle with.

Finally, Hodges directs his readers to the Scriptures. One of the realities he discovered in his research was that many people were delivered from their depression merely by the presence of hope. In surveying a number of drug trials he found that often people were helped equally, if not more, effectively by placebos as were helped by actual antidepressants. A study published in the Journal of the American Medical Association in 2002 compared the results of depressed patients who took Zoloft, with those who took St. John’s Wort, and with those who took a placebo. The results were astounding. Hodges reveals:

They found that the antidepressants gained a full remission of depression in 25 percent of patients, while St. John’s Wort (an herbal remedy) did so in 24 percent of patients. The findings were stunning since they indicated that an inexpensive over-the-counter herbal remedy worked as well as an expensive medication. But the most interesting part of the study was that the placebo worked better than both, with nearly 32 percent of the patients getting over their depression. More research reported in 2002 not only confirmed these findings, but raised more questions about the effectiveness of antidepressants. (48)

As Hodges considered this reality he posited that if there are “27 million Americans who are helped just as much by their hope for relief, maybe it would be a good idea to look at the role hope plays in medicine for just a moment” (50). This leads him into a lengthy discussion of the kind of hope the Bible offers to those who struggle with so-called mood disorders. Not only did research reveal that those who believed in God were more likely to experience relief from or decrease in their depression, but that is precisely what God promises in His Word. Because Hodges takes the Scriptures seriously he explores extensively the hope that Jesus Christ offers to His followers and the help he brings to those living with a depressive state.

This is a phenomenal resource for counselors. As a medical doctor and a Biblical counselor Dr. Hodges is able to do a great deal of heavy lifting for us and give us access to a multitude of scientific research that helps us to think through this important issues. Contrary to some critics, Hodges does not suggest that real mood disorders are impossible, nor that medication is never useful in treating such mood disorders. He readily admits there are such cases, but he also follows the research in claiming that they’re not as common as the number of misdiagnosis suggests. I have not read any other book like Good Mood Bad Mood. It has provided me with a  great deal of help and hope for counseling those who struggle with mood disorders. Furthermore it offers some much-needed pushback to the way depression and bipolar disorder have often been spoken of and treated. Counselors and clinicians would be well served by reading this book.