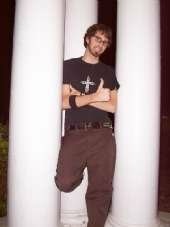 If I was clueless, my heart was (generally) in the right place. I was a young punk in college with a passion for Jesus, reaching the lost, and for teaching the Bible. I was frustrated, however, with what I perceived as major flaws in the way church was done. It wasn’t that I had grown up in some particularly awful context. I was never abused or personally hurt by the church, never under the thumb of some legalistic cult, etc. I just felt as though the church had become more concerned with structural organization and tradition and was, as a result, lacking in authentic discipleship – especially among those who didn’t fit the typical organizational/traditional model. So, if my desire for Punk Rock Church was misguided it was from a genuinely good place.

College was a season of deepening and stretching my faith. Going in to college I had no concepts of theology, apologetics, or really even how to study the Bible. But in that setting I was leading people to Christ, learning to defend my faith, seeking to define what I believed, and even leading Bible studies. I was growing like crazy, even while I was struggling. Yet, all of this I did apart from any close connection to a local church. I started to convince myself that I didn’t need the church, at least not the way I had known it. I started to develop the idea of launching a new kind of church. So, the idea for Punk Rock Church was born.

Punk Rock Church was not thoroughly developed, but I had three core commitments that marked out what I wanted to develop. First, I wanted a misfit church. The goal was to be a church more committed to authentic community than the polish of professionalism. I wanted a church where anyone was welcome, no matter what their story, background, or appearance. I wanted church that would make us all uncomfortable at times, that would force us to pause in life or worship and care for one another. Second, I wanted passionate worship. I was obsessed with music, as I’ve previously said, but it often seemed that music was the least interesting part of most worship services I had attended. They lacked power, excitement, and artistry – at least as I defined those things in my own mind. I wanted powerful worship that would invite people to see that the God I loved was awesome! Third, I wanted church beyond a once-a-week corporate gathering. I wanted real community that resembled the idea of the early church’s gathering:

And day by day, attending the temple together and breaking bread in their homes, they received their food with glad and generous hearts, praising God and having favor with all the people. And the Lord added to their number day by day those who were being saved. (Acts 2:46-47)

I was earnestly wanting regular community. I wanted a regular context into which to invite non-Christians, and a regular fellowship in which to find help, hope, and joy. These were my three major commitments.

There were significant issues with all of my thinking at the time. I was too critical of the church, allowing my own preferences, biases, and blinders to keep me from seeing the truth. I was also way too heavily influenced by Jay Bakker, who was in the process of abandoning orthodoxy. I really love(d) Jay and what he was doing, but he wasn’t a good role-model. Thankfully, God brought along another who mentored me and brought me back to a more conservative model of ministry and theology. I am immensely thankful for the “straight-laced” Southern Baptist pastor who mentored me for 3 1/2 years.

If Punk Rock Church wasn’t a good idea, there are clearly elements of it that are. Those three core aspects of misfit church still appeal to me. If I am grateful to have been brought back to conservative theology, I still have a bit of love for that progressive methodology. Punk Rock Church is dead, but maybe misfit ministry is still alive! I hope it is.

Nostalgic Song of the Week: “Pitiful” by Blindside

Blindside is a Christian nu-metal band from Sweden, and in early 2000 they were blowing up! In 2002 their album Silence garnered them national media attention, including appearances on Late Night with Conan O’Brien and a national tour. Their hit single off of this album describes the desire to pursue sin over and against Jesus and the disastrous consequences of such a pursuit.

The consequences of walking “where I don’t belong” are serious, and yet Jesus calls to us, inviting us to return to Him. This only makes our rebellion all the more sad. The lyrics are brutally honest about this reality:

It is a shockingly honest song, even haunting. Listening to it, even in a nostalgic fashion, still proves convicting. The truth of sin’s bondage, devastation, and ugliness is very pronounced in both the lyrics and the musical style. It’s a harsh sound for a harsh truth. It’s not a John Piper sermon, but it’s good hardcore theology!